Ok, so this is what most people would call Tamale Pie. But does it have anything to do with tamales? Not the way I make it, or the tamale I like. Since I do not write for pay or clicks, I'll call it what I want then. Today I'm jotting down the 'recipe' we used tonight because it turned out well! I just realized that we could have cooked the meat in the dutch oven and made fewer dishes. I'll have to do that next time.

You will notice that there's no cheese - we add ours on top, but you are welcome to put some in the filling if you like.

1. Preheat oven to 400º F. Saute onion until it's starting lose color, then add in ground meat, spices, and garlic. Cook until meat is done.

2. Transfer meat to cooking dish (I used a 9-inch dutch oven), stir in tomatoes, beans, and corn. Add cheese if you're using it.

3. Mix the topping ingredients all together, then pour over filling.

4. Bake at 400º F 30-40 minutes, or until cornbread is cooked through. (alternatively, just cook the cornbread separately so that you can start it while you're cooking the rest.)
Posted by Beki at 8:49 PM No comments:

I had rice and oatmeal today. So yummy. I also indulged in a little paleo baking with this cassava pizza crust. Easy, even if a long process. The result is a little gummy, but still super tasty. No complaints here!

And so far no trouble with the rice or oatmeal, even though I really don't expect there to be. Yay! 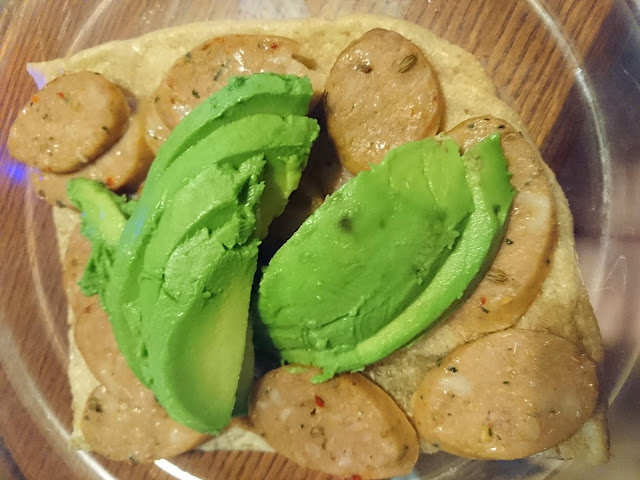 So the reason I finally decided to try the Whole30 was because I knew enough people who found it really helpful and even do it regularly. Would I recommend it to others, then?

Yes, if they are concerned about potential food sensitivities and don't want to do a full on elimination diet. I am happy to know that none of the things I've been avoiding was making me feel bad in ways that I hadn't realized! It was also good to get a reminder that sugar and dairy aren't really my friends, even though they try to pretend that they are. They're so damn seductive.

I would give a few warnings, though. First, I find the online forums too negative and harsh to be useful for me. In one question, someone admitted they were new, and were wondering about crunchy foods. People who responded (including a moderator) quickly assumed that the asker was looking for snacks and were really rude about snacks being TERRIBLE FOR YOU. Well, that's not what the question was, and the topic of snacking, while discouraged by the whole30, is not a rule. Besides, that kind of question is between you and your doctor. Other questions I saw were met with a similar puritanical attitude, let me be more whole30 than you. I was looking to feel better, not be chided by trolls with nothing better to do.

Second, only do it if you can accept that you might not get any results. Most people do, but the whole30 leaves in things that bother a lot of people, like I realized the tree nuts were doing to me. In addition, while what we eat is extremely important, there are other causes to illness. I've heard from several people that did the whole30 and other eliminations for migraines, but never found a trigger. Research suggests that many migraineurs (so fancy) have a food trigger, but not all. So it might not help, and you need to be happy with knowing you don't need to fear cake if nothing changes for you. Or be happy knowing that cake WILL be a problem, and learn to avoid it. If you don't know, don't do it.

Third, this is a *paleo* diet. If you are looking for a robust elimination diet, you need to keep looking. White rice, select steamed veggies, and chicken is the strictest version. By keeping some of the top 8 allergens, like eggs and tree nuts, this is certainly not an all purpose elimination diet.

One thing Mr More Calories said at the beginning was that several people had told him how much they love how they feel on the whole30, but why don't they do it more? I think that staying mostly compliant is totally doable, so my guess is that the effort (or perhaps cost) is more difficult than they personally find to be worth whatever benefits they got from it.

I'm glad I tried it, and ready to eat a few things I miss. And I'll work on keeping the vegetables up for sure. 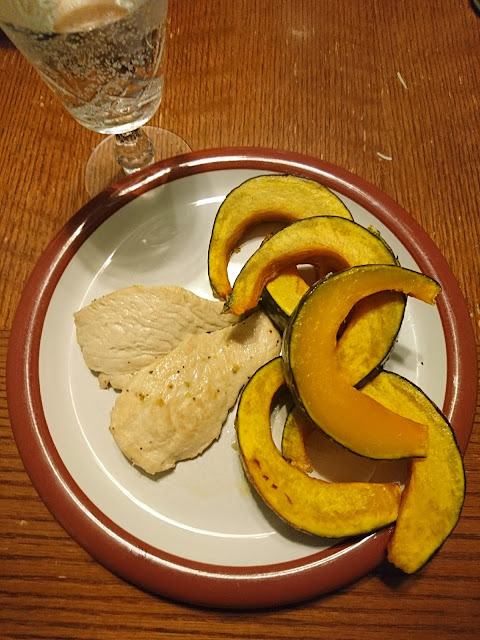 Was this month "life-changing"? I don't think so, but only time will tell.

Was it useful and informative? Yes.

Even though I feel largely the same, I don't regret it. There are some small ways I feel different, but not things I'd say are worth all the extra hours of food prep and menu planning. (I always plan my menus, but it's usually much quicker!)

Learning that nuts bother my stomach was useful. Getting a strong reminder that even the sugar in fruit doesn't go well on an empty stomach was good. (though Mr. More Calories was quick to point out that I'd decided that once before. Well, my sweet tooth usually doesn't care. Hmph.)

All that practice saying no to free food at the office was good. There are things people bring that I don't even really like, but I eat them because they're free and there and not bad. Don't do that. Eat a small part of things you like, and leave the rest.

There may be more things, but now it's time for bed! 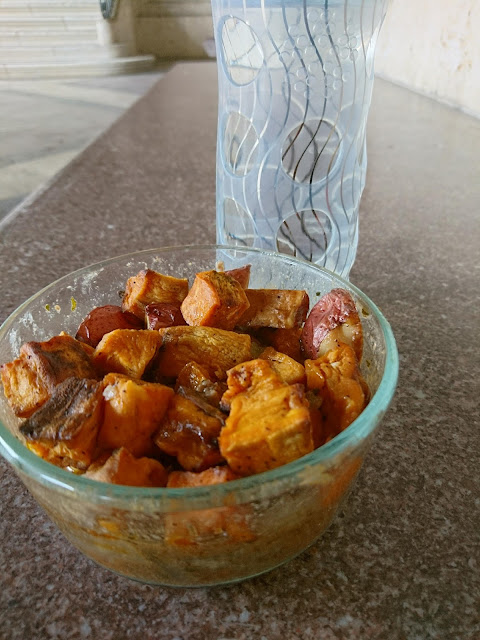 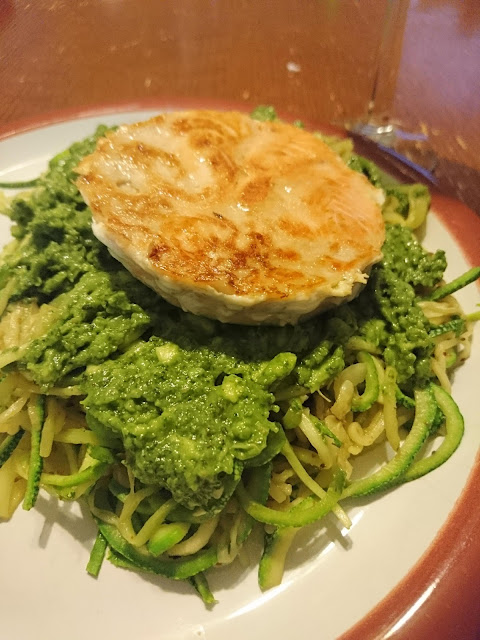 So, the weekend and Monday all passed without any word from me. Sorry.

We had my nephews, as usual, and they stayed till Sunday mid - day doing exciting things like shopping for the week's food. Last night was Deconstructed shepherd's pie, but it looks like the photo didn't save, sad. Maybe I'll remember to take one at lunch if you're lucky.

I again made it through the weekend without eating food I made, so that's good. I did feed them more salad than they're used to, they were not happy with me about that. But my goal is to make them healthier, not happier. The 4 year old even ate a good bit of his hours later when he learned that the mini ice cream he picked out was off limits to salad haters.

I gotta say, I'm looking forward to reintroduction. I'll probably do my own version since not all legumes are equal. For example, soy and peanuts are much more common allergens than black beans. But white rice first since many medical elimination diets leave it in.

I think a peanut egg white oatmeal bar could make a really good small meal as long as I respond well to the ingredients. We'll see!

I picked a recipe for dinner that uses shredded chicken, but shredding it out kind of annoying. Luckily, the internets showed me a better way! Shred chicken with a stand mixer! When I first flipped it on, one breast jumped right out into the counter, but I rescued it. It was more to clean, but worked really well.

Tonight I took off from cooking, it was great. MMC got us dinner from a healthy restaurant that has several hearty salads that can be whole30. I also prepped a crock pot of lamb tajine for tomorrow, I'm pretty excited about that.

I gotta say, I'm really looking forward to peanut butter. It'll be in two weeks probably, but I'd really like some! I'm gonna be so sad if my body disagrees. We'll see! 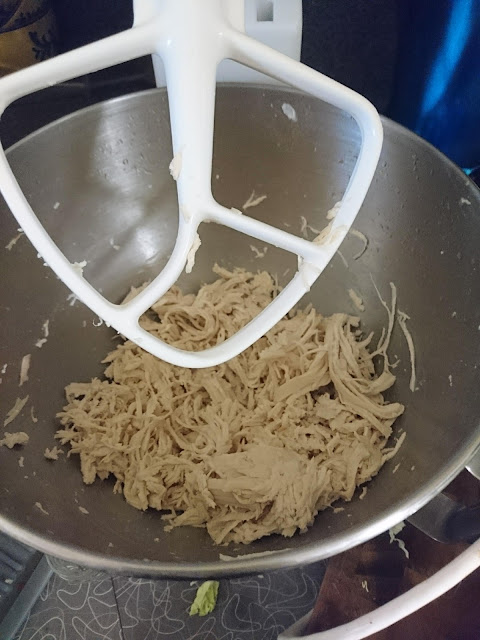 Day 23:
Breakfast : 2 hard boiled eggs, bacon, and.... Something green
Lunch: left over pesto squash and chicken sausage
Dinner : chopped salad with chicken and a ginger sesame dressing
Day 24:
Breakfast: 2 fried eggs, I piece bacon, half a sweet potato
Lunch : left overs
Dinner : steak salad from modern market (no cheese, no dressing) so glad they list all of their ingredients!
Posted by Beki at 6:06 PM No comments:

Before starting this I thought that the idea of limiting fruit was kind of silly, because it's really different from added sugars. Well, for the lady two days I've eaten baby carrots and meat (and guacamole today) when before I like have eaten an apple. I even had to go to the fridge to grab the carrots when the apple was at my desk. In fact, I think that a couple bites of banana was all the fruit I had today. So there you have it, folks. I have curbed my interest in sugar to the point that I have almost given up fruit by accident. I would have never expected that! 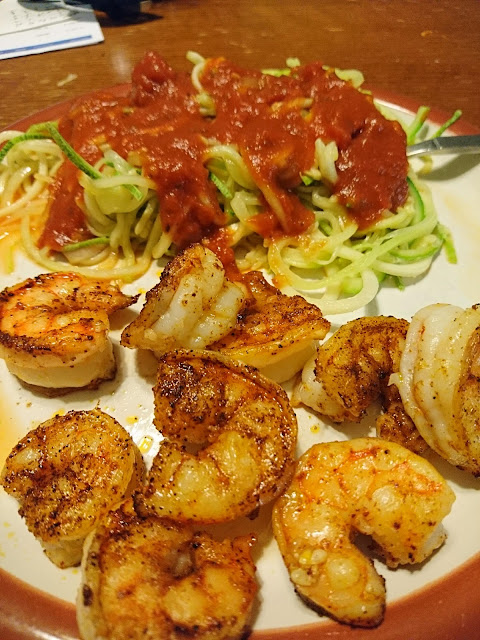 I didn't post this yesterday, but you can admire my beautiful dinner picture now. Even Mr More Calories enjoyed the spaghetti squash. I had cooked everything and he came into the kitchen, saw it, then started searching the counters.

Me: what are you looking for?

MMC: The magic! (I give him a confused look) (he gestures to the squash) the magic! How did you do that?

It was pretty funny. He also learned that peanuts are legumes this month. Crazy how we each know things that we think are obvious, but that the other has no idea about 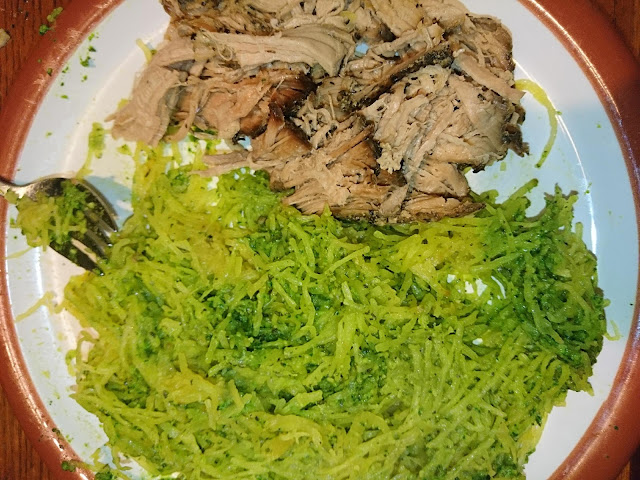 Breakfast : 2 hard boiled eggs with... Something?
Lunch : left overs
Dinner : spaghetti squash with 'pesto' and crock pot pork that I had frozen
Posted by Beki at 7:45 PM No comments:

More kid fun this weekend! I am getting better at it. I still wanted all the cookies while walking one down the cookie aisle to pick out dessert. And I wanted to try the coconut chocolate chip cookies we made. But I just ate my safe foods and continued on.

We also had brunch at a friend's house and they were super cool about us bringing some stuff, and they made other food I could eat. Looked up whole30 recipes and all! And made tasty coffee, it was a nice meal and hang out all around.

I feel a little better today, but I'm also afraid it's some crazy fluke and don't want to say more. It might not even be food related. But we'll see how I feel tomorrow and go from there! 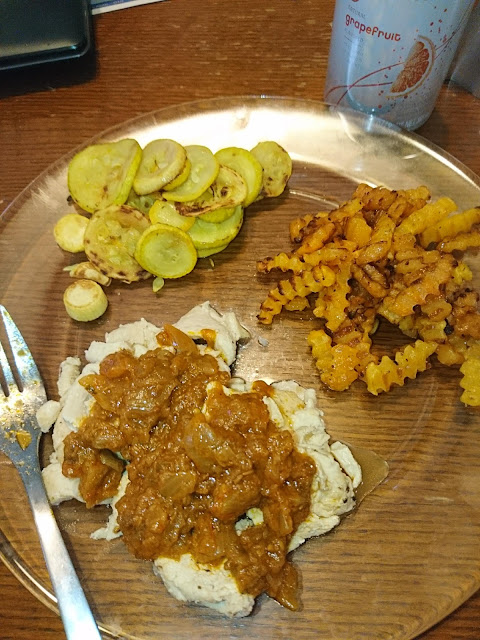 Well, I have survived to another Friday. Yay? I had an appointment early in the day, but not as early as work. So I got to sleep in a little AND eat breakfast at home. So I had breakfast salad. 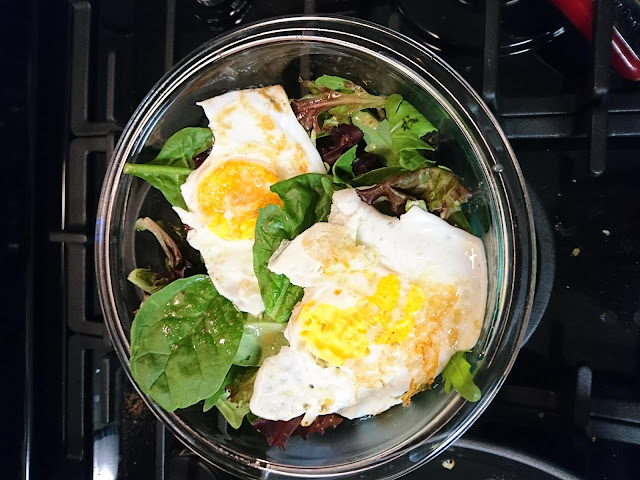 Breakfast : 2 eggs, a hot dog, mixed baby greens
Lunch : left overs
Dinner : steak salad from a restaurant! No cheese and my own dressing
Posted by Beki at 7:48 AM No comments:

Our recipes by date